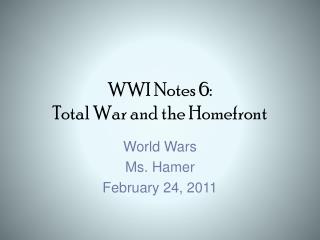 WWI Notes 6: Total War and the Homefront. World Wars Ms. Hamer February 24, 2011. Definitions. Total War: When the entire population is working for the war, whether as a soldier or on the homefront Notes - Eclipses solar eclipse a. umbra: -dark, central region of the moon’s shadow -you can see a total eclipse

Aftermath of WWI Italy - . by: rob, robb(jon), and robbie. postwar settlements. italy was left out of major decision