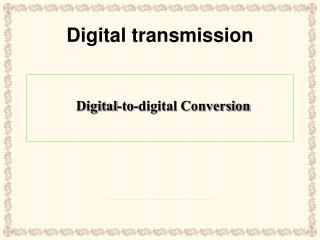 RTTY - . a primer on the second digital mode plus a bit of psk k2yg jan 9, 2012. history. the first digital radio mode

Fundamentals of Digital Radiology - . george david medical college of georgia. so what is “ digital”?. what we mean

OBJECTIVES - . after studying chapter 11, the reader should be able to: check the fluid level in an automatic