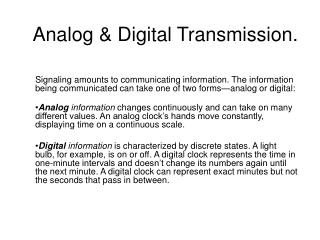 Analog & Digital Transmission. . Signaling amounts to communicating information. The information being communicated can take one of two forms—analog or digital:

DIGITAL-TO-ANALOG CONVERSION - . digital-to-analog conversion is the process of changing one of the characteristics of an

2.7 Digital Transmission - . discussing the schemes and techniques that are used to transmit data digitally