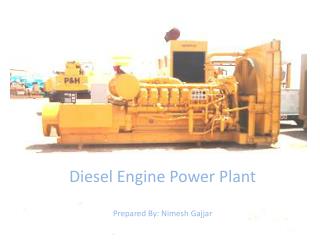 Diesel Engine Power Plant Prepared By: Nimesh Gajjar. Definition. A generating station in which diesel engine is used as the prime mover for the generation of electrical energy is known as diesel power station. . Diesel power plant. Introduction: The Diesel Cycle - By: andrew hoover objectives: explain the diesel cycle relate it to basic examples is our engine a

THE NEXT GENERATION SUSTIANABLE (BIO-DIESEL) - . by: shah dhwanish. the next generation sustainable fuel. what is bio