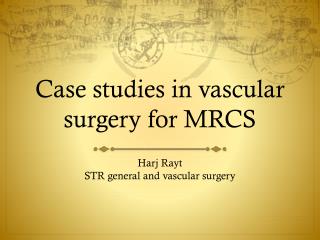 Case studies in vascular surgery for MRCS. Harj Rayt STR general and vascular surgery. What is an aneurysm?. What if its less dilated? What is arteriomegaly ?. Focal dilatation of a blood vessel to more than 1.5x the normal diameter. CHAPTER 23 - . peripheral vascular surgery. objectives. after studying this chapter, you will be able to: recognize the

HOW TO IMPROVE BILLING AND COLLECTIONS - . case studies. presented by. caryl a. serbin, rn, bsn, lhrm president and

Patients admitted to the Department of Vascular Surgery - . excluded because declined to participate or had symptomatic

Intercollegiate MRCS Examination – Outside the UK - . 2011 and beyond. what are the changes?. replacement of mrcs parts