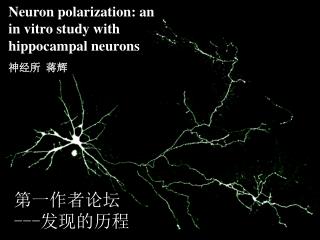 Neuron polarization: an in vitro study with hippocampal neurons 神经所 蒋辉. 第一作者论坛 --- 发现的历程. Why is polarity important?. My personal belief: The really important thing is that could be understood by layman without much explanation. Neuron is polarized --- an idea dates back to 100 years ago.

Nerve Fiber Classification - . nerve fibers are classified according to: diameter degree of myelination speed of