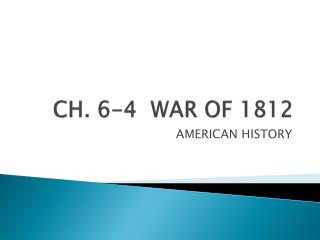 CH. 6-4 WAR OF 1812. AMERICAN HISTORY. VIOLATING NEUTRALITY. Why did the USA and Britain get into a war so soon after the Revolutionary War? Unresolved tensions about the Northwest Frontier and problems on the seas 1803—USA caught in the middle of British trade disagreements