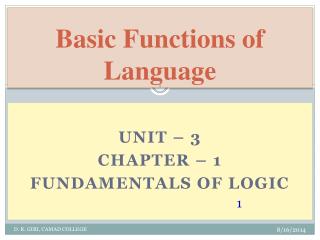 Compilers -- Basic functions - . generally, an independent course, maybe plus one semester on implementation of a

Basic Functions of the Structures of Animals - . sc standard 6-3.2  summarize the basic function of the structures of

Functions Of Language - . before we move towards the functions of language, first we should understand what language is.

Language Functions - . what is a function?. a function is a reason why we communicate. every time we speak or write , we

Basic Functions of a Student Intern - . these are simple suggestions! don’t forget to constantly communicate with your