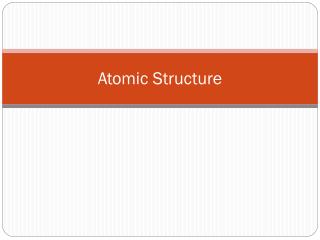 Atomic Structure. Pure Substances. elements: (a) made of one kind of atoms, the simplest building blocks of matter (b) use the name or atomic symbol (Ex) hydrogen = H oxygen = O (2) compounds:

ATOMIC STRUCTURE - Ch. 3. atomic structure. sizing up the atom. elements are able to be subdivided into smaller and