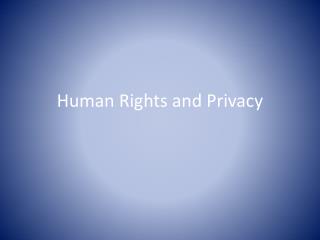 Human Rights and Privacy. Basic Concepts. Is it good enough to know the “definition” of a concept or term? Difference between political philosophy and political science. Are lawyers and politicians experts on such issues?. Privacy and Human Rights - . the action for misuse of private information has grown out of the older equitable claim for

Civil rights and human rights movements: - . agenda for today and tomorrow. tsw learn key vocabulary and ideas about the

Human Rights - . a brief introduction. what are human rights. they are a set of principles agreed by the members of the

HUMAN RIGHTS - . human rights - definition:. “inalienable and inviolable rights of all members of the human

Human Rights - . freedoms – privileges that are so basic they cannot be restricted by laws of the governments (e.g.