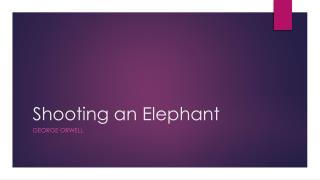 Shooting an elephant - . chanse cook. author. george orwell –he was against totalitarianism and was more for democratic

“Shooting an Elephant” by George Orwell - . key vocabulary. essay. a short nonfiction piece of writing that is not

The elephant who turned into an elephant shrew - . page 1. one day three e lephants a mamma a papa and a kid named elie

I can't define an elephant - . but i'll know when i meet one. drivers... expectations environmental pressures new

Can we Verify an Elephant? - . david harel the weizmann institute of science. surprisingly many parts of this were

DON’T ACT LIKE AN ELEPHANT! - . ♫ turn on your speakers!. from an article by thomas j. stevens. strange statement,

‘A Hanging’ by George Orwell - . ♣ purpose. the main purpose of george orwell’s non-fiction essay, “a