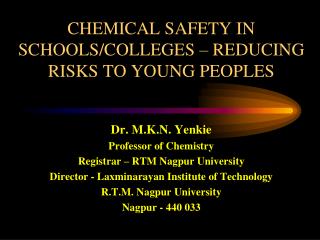 Reducing Health Risks - . effective ways to reduce the risks from other factors. take action to avoid or reduce known

Chemical Risks in the Process Industry - . topics. definition of hazards types of hazards and potential consequences

Chemical Safety - . walking the walk not talking the talk!. chemicals are a hazard. hazard: potential to cause harm

Young Carer’s Support in Schools - . schools want. to identify to support to have help to have training to keep going.

CHEMICAL SAFETY - . chemicals. chemicals have an indispensible role to play in fulfilling the basic needs of present day

YOUNG APPLICANTS IN SCHOOLS AND COLLEGES SCHEME (YASS) - . a uk he success story ‘ the case study for he modules in