How did World War I cause World War II? - PowerPoint PPT Presentation 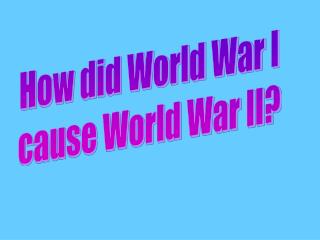 1 / 26
How did World War I cause World War II?
489 Views
Download Presentation How did World War I cause World War II?. World War I was supposed to be " the war to end all wars". President Woodrow Wilson told U.S. soldiers that they were fighting "to make the world safe for democracy". But 20 years later, an even more terrible war started!.