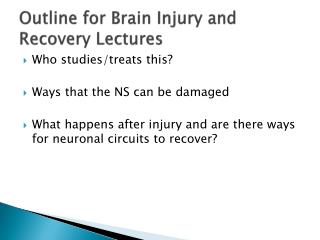 Outline for Brain Injury and Recovery Lectures. Who studies/treats this? Ways that the NS can be damaged What happens after injury and are there ways for neuronal circuits to recover?. Who studies and treats brain disorders?. Clinical neuropsychologists Neurologists Neurosurgeons Outline for Brain Injury and Recovery Lectures - . who studies/treats this? ways that the ns can be damaged what happens

Injury and Recovery - . lesson 6. identify six warning signs of injury. there is always a chance that you’ll get hurt

Outline for Lectures 9 and 10 - . edge effects assessing patch quality in a fragmented landscape source vs sink

Recent findings regarding recovery from brain injury - . plasticity - brian kolb use of virtual reality use of smart

Injury Recovery - . by: dakota oeskovic. goal. help athletes get back on their feet after an injury. make recovery time

Outline of Lectures - . 18 review of the work on contagious disease by koch. 19 epidemiology and public health. 20

Traumatic Brain Injury - . by: shauna rowland. what is