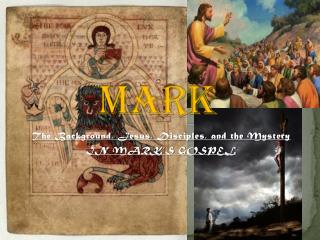 MARK. The Background, Jesus, Disciples, and the Mystery IN MARK’S GOSPEL. So…Who really was Mark?. VS. Not this Mark…. Thiiiiisss Mark. Mark’s life before his soul was touched by the hand of God. Grew up in a Jewish house-hold Was born in the 1 st Century, specific dates unknown MARK - . the son who came to serve. the gospel according to mark. the author: john mark writes to the gentiles no

Mark - . “your sister church in babylon, also chosen by god, sends you greetings, and so does my son mark.” (1 peter

St. mark - . the apostle. common pictures of st. mark. do you see any similarities?. facts. he was a jew born: cyrene in

MARK TWAIN - . 1835-1910. &quot;we recognize that there are no trivial occurences in life if we get the right focus

Discipleship in the Gospel of Mark - . fall 2013 series. if you touch an unclean thing or person, you become unclean.