How to Prove You Can Write Good Papers - PowerPoint PPT Presentation 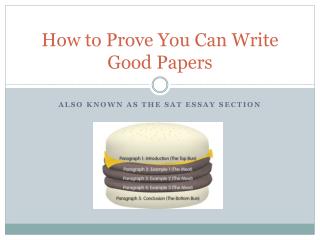 How to Prove You Can Write Good Papers How to Prove You Can Write Good Papers. Also known as the SAT essay section. How are you graded?. Five key ingredients: - appropriate examples - organization and focus - language and usage (glitzy vocabulary!) - varied sentence structure - grammar. What does this mean?.

How to Prove You Can Write Good Papers

How to Write a Good Conference Proposal - . limin zheng foreign service institute zhengl@state.gov. to be discussed.

How to write papers: “Materials and Methods” “Results and Discussion” - . changying li may 2, 2012. two golden

How to write papers/manuscripts while still in fellowship - . michael hawkes , md, phd. objectives. to know the

“How to Write a Good ALT Text” - . by jojo i. esposa jr. manila christian computer institute for the deaf (mccid)

How to Write a Philosophy Paper - . the reader. in reality, likely only one person will read your paper: me. however,

How to write a good essay - . introduction. sentence 1: what is your essay about (make sure you reference the exam

How to Write Research Papers - Acknowledgment: the slides were prepared via valuable discussion, feedback from various

MUN Research - What are you researching for?. writing position papers, working papers, resolutions, and

Learn How to write a concept paper? - Concept paper always should be updated with proper guidelines for it's approval.