The Religion of the Shinto's - PowerPoint PPT Presentation 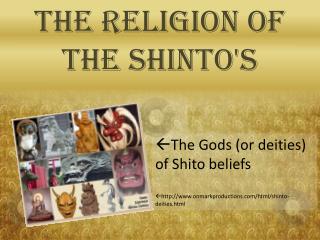 The Religion of the Shinto's

The Religion of the Shinto's. The Gods (or deities) of Shito beliefs http://www.onmarkproductions.com/html/shinto-deities.html. The History of Shinto Beliefs . Quick Facts On Shinto Beliefs (Will be elaborated on in next few slides ) http://www.patheos.com/Library/Shinto.html.

The Religion of the Shinto's

Shintoism - . by: drew brackett, austin frueh, and jesus valdez. the numbers. 3-4 million are shintos no founder no

Shinto - . sia, natalie, michelle, calvin, amin and lester. what is shinto?. shinto is a general term of the activities

Shintoism - . by roman s.and trey c. history of the religion. shintoism is an old japanese religion. it began in japan

Shinto - . the traditional japanese religion. the name. shinto is interpreted “the way of the gods” the name came

SHINTO - . origins. the name shinto comes from shin tao or “the way of the divine”. date: about 2500 years ago.

Shinto - . demographic information. due to the nature of shinto practice and belief it is hard to get a very accurate

Class 7b: Geographies of Religion - . religion and culture. everyone has values and morals religion means worship, faith

Warm-up #4 - . which of prince shotoku’s contributions to japan were the most important? why? compare and contrast