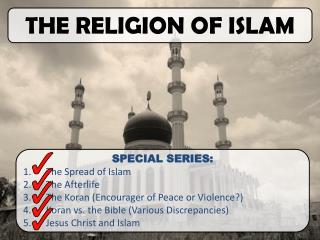 THE RELIGION OF ISLAM THE RELIGION OF ISLAM

The First Global Civilization: The Rise and Spread of Islam - . chapter 6 eqs: what is the history behind islam? what are

MISCONCEPTIONS ABOUT ISLAM - Iramya bought the first mall in the main city of alwar. this project is a fully commercial

The Religion of Islam - . submission to god’s will. the youngest of the three religions followers are called muslims.

ISLAM: Submission to the Will of God - . the judeo-christian foundations of islam. origins of the faith. mohammed 570-632

Islam: - . myths and reality. terminology:. the religion is called islam . the people are muslims. 3. myth #1:. most

Muhammad-Founder of the religion of Islam - . a profit is born. muhammad was born on the arabian peninsula, in mecca