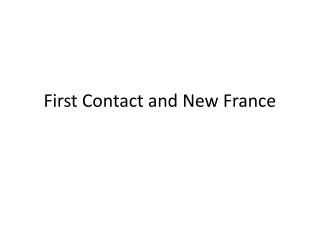 First Contact and New France. Getting Started. Study the drawing of Jacques Cartier claiming the Gaspe Peninsula for France on the opposite page. First Contact - . exploration. 1450 – 1600 was europe’s age of exploration. explorers would convince monarchs to give

FIRST CONTACT - . john cabot sailed to newfoundland in 1497 and returned to england with tales of the briming seas full

First Contact - . what makes an explorer?. why do we explore?. vikings come to canada. leif eriksson first european on

LHC: First Contact - . global grid operations - what it means for the lhc grid and the hep community jamie.shiers@cern.ch

New France - . history grade 11. early french exploration and colonization. the british were searching for an arctic