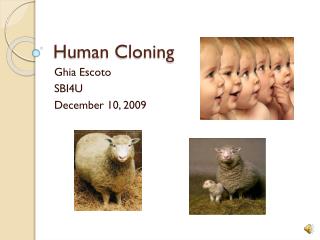 Human Cloning. Ghia Escoto SBI4U December 10, 2009. What is it?. Cloning is the creation of an organism that is genetically identical to another organism. There are different types of artificial cloning: Recombinant DNA Technology or DNA Cloning Reproductive cloning Therapeutic Cloning Human Evolution - . who are we? where did we come from? what is the human genealogy? these are basic questions that we

Human Biology - . bio 130 nickolas v. kapp ph.d. we have organized life and assume some relationships. a look at human

Cloning - By: zack mcclanahan &amp; tyler evans. cloning. what is cloning?. cloning is producing the genetic twin of