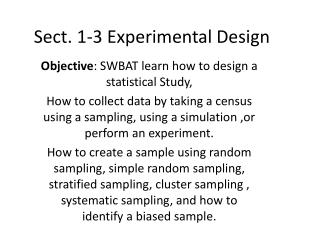 Sect. 1-3 Experimental Design. Objective : SWBAT learn how to design a statistical Study, How to collect data by taking a census using a sampling, using a simulation ,or perform an experiment. CHAPTER 3 Sect. 1 Learning Target 7.2.1 - . we will describe the geography and climate of the arabian peninsula, and

Experimental Design - . a researcher can most convincingly identify cause-and-effect relationships by using an

Experimental Design - . how to design a psychology experiment. start with a research question it must be testable – you

EXPERIMENTAL DESIGN - . science answers questions with experiments. begin by asking a question about your topic. define

Experimental Design - . brian mennecke college of business iowa state university. the source…. the source of much of