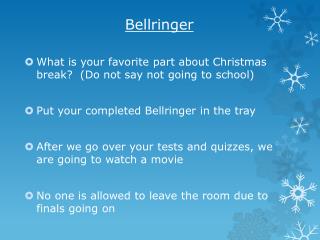 Bellringer. What is your favorite part about Christmas break? (Do not say not going to school) Put your completed Bellringer in the tray After we go over your tests and quizzes, we are going to watch a movie No one is allowed to leave the room due to finals going on. Bellringer.