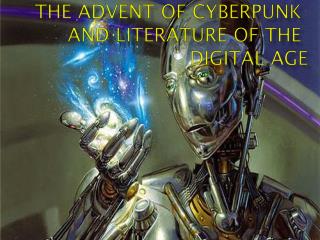 The Advent of CYBERPUNK and Literature of the Digital Age

The Advent of CYBERPUNK and Literature of the Digital Age. I, Robot. The Big Question. What makes humans, “human?” Ideas??? (From clip or your own). But First…An Introduction. Kyle Fauss Born in Jacksonville, Florida Lived in Australia (3 years)

The Advent of CYBERPUNK and Literature of the Digital Age

What is Steampunk ? - . steam = reference to the industrial age, steam-powered mechanics punk = rebellion against the

Steampunk - . by: kirsten corcoran. &quot;the ballad of mona lisa&quot;-panic at the disco. a steampunk music

CORE 1010 Seminar offerings - . department of rhetoric and composition academy of liberal arts the american university in

Science Café H-LSAMP Book Discussion Group Suggestions for Spring 2014 - . the people in the trees – by hanya

Advent Today - . advent means ‘the coming’ of something. advent is a period lasting four sundays (not weeks!)

Advent - “before we get into the scripture today, we need a little bit of background on the context within which the

The Liturgical Year - . the liturgical year begins the first sunday of advent. advent is a time when we prepare for

CHRISTMAS IN BRITAIN - . in some families , it all begins with the making of the christmas pudding , some days or weeks

Preparing for Advent - . week one overview of the christian calendar meaning of advent idea of preparation week two