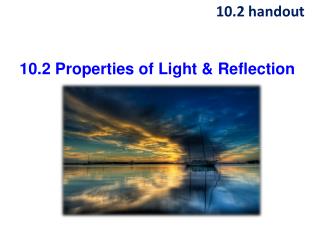 10.2 handout. 10.2 Properties of Light & Reflection. 10.2. Rays of Light. Reflection: The change in direction of a light ray when it bounces off of a surface. Medium: The substance through which light travels. 10.2 - Circulatory system. 10.2. is located in the thoracic cavity behind the sternum it is about the size of your fist

10.2 - . monroe appointed members from each section of the u.s. so that all sections had a voice. the democratic republic

Handout - . please pick up a copy of course outline, lecture# 1 handout and a blank card from the front on the card,

Section 10.2 - . acting like a professional. back to table of contents. what you’ll learn. how to react

7.2 Right Triangle Trigonometry - . in this section, we will study the following topics: evaluating trig functions of

Chapter 10 Organohalides - . what is an organohalide?. an organic compound containing at least one carbon-halogen bond