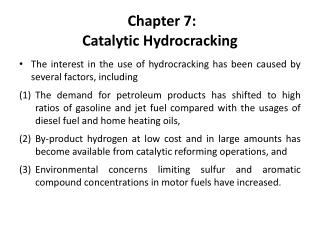 Chapter 7: Catalytic Hydrocracking. The interest in the use of hydrocracking has been caused by several factors, including The demand for petroleum products has shifted to high ratios of gasoline and jet fuel compared with the usages of diesel fuel and home heating oils, Chapter 10 Catalytic Reforming and Isomerization - . the demand of today’s automobiles for high-octane gasolines has

Catalysis and Catalytic Reactors - . 授課教師：林佳璋. catalysis. definitions. ~a catalyst is a substance that