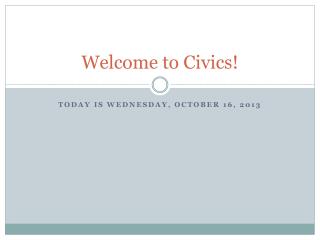 Welcome to Civics!. Today is Wednesday, October 16, 2013. Federalism. The division between state rights and federal rights. 10 th Amendment: States have rights not expressly given to the federal government in the Constitution States cannot go against federal law So, what’s the issue?

Welcome to the World of Algebra - . a mathematical thinking race!. two aliens, xigmat and yancy have just arrived on

Introduction to Civics - . what is civics?. civics is ... the study of how government decisions (public decisions) are

Welcome to Civics! - . civics is the study of local, state, national, and international governments with a focus on your

Warm-up - . skip over 3 sets of pages in your notebook (that means 3 left and 3 right!) i will do notebook organization

Welcome to Civics! - . mrs. ashley adkins. what will we learn about?. important historical documents such as the