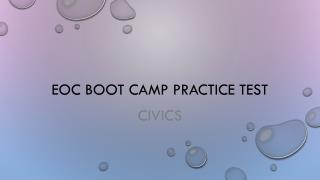 EOC Boot camp practice test. Civics. Question 1. The diagram shows that the colonists formed some of their political views from some historical documents . Which phrase completes the diagram? A. separation of powers B. economic freedom C. self-government D. individual rights. Answer 1.

The Best Way to Show Your Child That Camp Is Fun - Camp walt whitman, located in the white mountains of new hampshire, is

Life Boot Camp - . 5.8a differentiate between weather and

Life Boot Camp - . 5.8a differentiate between weather and climate

Drafting Boot Camp - . why study drafting?. drafting is a form of graphic communication “a picture is worth a thousand

Life Boot Camp - . 5.8b explain how the sun and the ocean interact in the water cycle

Physical Boot Camp - . 5.6b demonstrate that the flow of electricity in circuits requires a complete path through which

Practice Test - . world history ap #7. in most of the early agricultural societies, people had an average life expectancy

Physical Boot Camp - . 5.5c demonstrate that some mixtures maintain physical properties of their ingredients such as

Practice Test US History Unit Eight - . instructions for use: click the mouse and a question will appear, some with