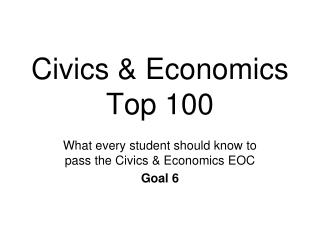 Civics & Economics Top 100. What every student should know to pass the Civics & Economics EOC Goal 6. Goal 6: The learner will explain why laws are needed and how they are enacted, implemented, and enforced at the national, state, and local levels. Foundations of Law. Code of Hammurabi – Welcome to The Economics of Sports! - Why study sports economics? sports and recreation industry is a big business. pre:

International Economics - . james b. wilcox resources provided by: the university of southern mississippi center for