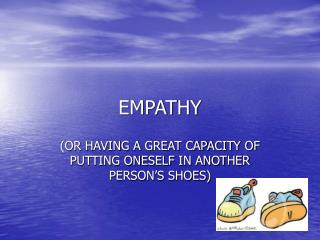 EMPATHY. (OR HAVING A GREAT CAPACITY OF PUTTING ONESELF IN ANOTHER PERSON’S SHOES). THERE’S AN OLD CHEROKEE INDIAN SAYING:. Walk a mile in another's moccasin... . IN HARPER LEE’S TO KILL A MOCKINGBIRD:. Empathy - A leader must know their follower’s pain. empathy. self-aware leader. experience of emotions expression of

Empathy - . it’s not just about shoes. it’s what you do when you’re in someone else’s. american proverb –

Empathy - . davis (1994) multidimensional approach: perspective taking (pt): adopt the viewpoint of others (“i

EMPATHY - . what exactly is empathy?. break into groups of two and come up with a definition of what you think empathy is

Empathy - . the act of becoming other-oriented. what is empathy. it is the act of moving away from our selves and

Building Empathy - . let children catch you in acts of kindness part of a child’s allowance for service help children

WHAT is empathy - . the identification with or vicarious experiencing of the feelings , thoughts , or attitudes of

empathy mode lecture - . this work is licensed under the creative commons attribution-noncommercial-share alike 3.0

What is Empathy? - (sympathy is a synonym for empathy.). what is empathy?. ania u. the big

Chapter 2 Empathy - . amber gilewski tompkins cortland community college. what is empathy?. imagining yourself in someone