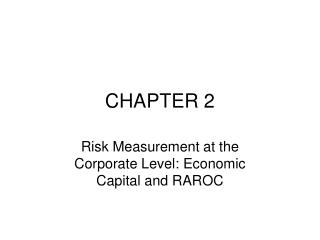 CHAPTER 2. Risk Measurement at the Corporate Level: Economic Capital and RAROC. INTRODUCTION. Economic capital the amount of equity capital that the bank should hold for covering its risk. The more risk a bank has taken, the more capital a bank has to prepare