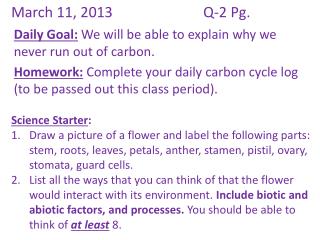 Practice for quiz Adv Trig (key attached) - . properties of logs solving exponential equations by taking the log or the

Homework – for Mon - . do a poster for a mosque to explain the 4th pillar of islam: zakat (duty to practice charity).

Tuesday February 24, 2009 - Objective(s): apply knowledge of plot structure, characterization, and cause and effect by