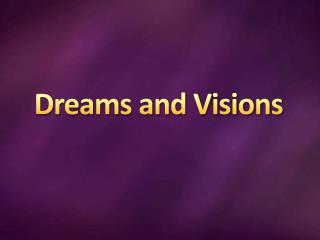 Dreams and Visions. Dreams and Visions. Acts 2:16-18 NKJV "But this is what was spoken by the prophet Joel: ‘And it shall come to pass in the last days, says God, That I will pour out of My Spirit on all flesh; Your sons and your daughters shall prophesy,

Story of Efficacious Events, How Dreams Becomes Reality - Like the event production london staff are best and making the

Using Dreams - . in homeopathic practice. all dreams are an attempt to heal the organism. goal of dream analysis. to

How To Achieve Your Childhood Dreams - . randy pausch carnegie mellon university. the elephant in the room…. dr. herb

Growing in the Prophetic: Dreams and Visions - . part one – who dreams? part two – why and how do we dream? part

All are Welcome - . let us build a house where love can dwell and all can safely live, a place where saints and children

Hold fast to dreams For if dreams die Life is a broken-winged bird That cannot fly. - Dreams langston

TRAIN TO REIGN ! - . unlocking the language of your dreams!. false prophets and false dreams!. the source . dreams and

Dreams - . the content of dreams. dreams: the mental activity found during sleep research shows that most dreams are

Vision/Mission - . visions are:. positive &amp; inspiring developed by the leader shared by the team comprehensive