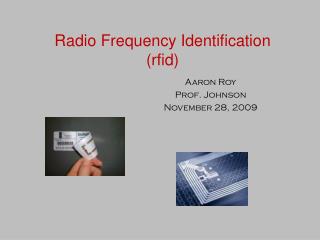 Radio Frequency Identification (rfid). Aaron Roy Prof. Johnson November 28, 2009. How do RFIDs benefit in my Life of Sports?. What is a RFID? What does an RFID do? How could these radio frequencies produce more accurate stats in sporting events like triathlon and car or motorcycle races?.

Radio Frequency Identification (RFID) - . what does an rfid tag look like?. microprocessor. radio antenna. where’s the

RFID Technology - . rfid stands for radio frequency identification. this technology allows transmission of data between a