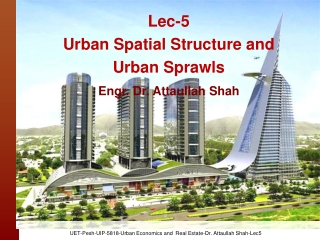 Lec-5 Urban Spatial Structure and Urban Sprawls. Engr. Dr. Attaullah Shah. Some basic questions. Why the new townships in Peshawar have been developed in the Hayatabad and Regi Lalma? What is the impact of high prices of plots on the density of population in Hayatabad? Urban Structure Models - . what to do today/tonight. 1. choose a partner or set of partners (no more than 3 may work

Models of urban structure - Urban / services fyi. 1. cities have many issues to deal with race relationstrafficwater