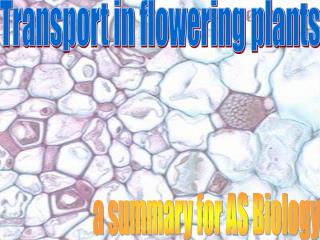 Transport in flowering plants. a summary for AS Biology. http://www.pearsoned.ca/school/science11/biology11/sugartransport.html http://dendro.cnre.vt.edu/forestbiology/cambium2_no_scene_1.swf. Objectives: Sexual Reproduction of the Flowering Plant - . learning objectives (1/4). state the structure &amp; function of the

Plants: Roots, Stems, Leaves - . students will be able to describe the aspects of roots, stems, and leaves and their

How do you use plants? - . since plants are so familiar, we may overlook how vital they are to human life:. how you use

Membrane Transport - . how stuff gets in or out. membrane transport. objectives: relate membrane structures to transport