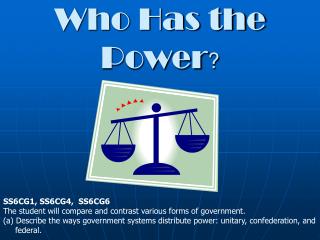 Who Has the Power ?. SS6CG1, SS6CG4, SS6CG6 The student will compare and contrast various forms of government. (a) Describe the ways government systems distribute power: unitary, confederation, and federal. First of all…what is government?. Government. The Power of Nice - . presented by cristi millard rmasfaa 2011 missoula, montana. what is the power of nice?. nice. is