1.01A – What typefaces should be used for various displays????? - PowerPoint PPT Presentation 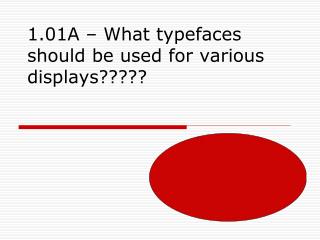 1.01A – What typefaces should be used for various displays?????. For this section, choose among the following typefaces. Serif Sans serif Decorative/Ornamental Script. Use this typeface for announcements (graduation & other formal announcements). Script (Example of Brush Script).

Is the Future flat? - . paul kafno hdthames@easynet.co.uk. content, distribution, displays. challenges for the next 10

Chapter 9 Other Peripherals - The complete a+ guide to pc repair 5/e. chapter 9 other peripherals. chapter objectives.

Automated Sequencing: The Easy Button for Animated Displays - . alan sielbeck – lipton lights. who are you? why do i

The Bar Graph or Bar Chart - . what is it? how to draw it. what is a bar graph?. a bar graph is a graph that displays

The Library Building - . overview of workshop : the exterior. the entrance the grounds the parking area. overview of

by peter - On display at its first venue in australia: melbourne museum 30 may - 24 august section 1 - introduction