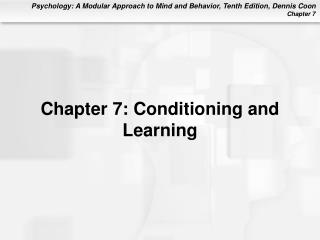 Chapter 7: Conditioning and Learning. Learning: Some Key Terms. Learning: Relatively permanent change in behavior due to experience Does NOT include temporary changes due to disease, injury, maturation, injury, or drugs, since these do NOT qualify as learning Chapter 1 - . the learning process. learning a change in behavior as a result of experience. learning theory. learning

Learning - . chapter 5. define learning. learning is a relatively permanent change in behavior as a result of experience.

Beyond the Bake Sale - . chapter 5. linking to learning. how will involving parents help your test scores? “the point