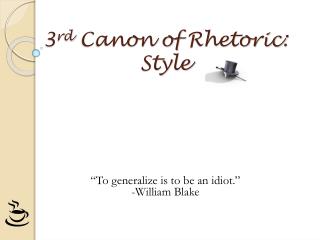 The Development of the Old Testament Canon, Part 1 - . objectives: 1 to illustrate the process by which the old testament

Persuasion Through Rhetoric - . words, phrases, and simple assertions. a psychological point about rhetoric and

Rhetorical Devices - . how to write an effective speech or essay. what is rhetoric?. a technique or art of persuasion in

What is MLA style? - . the style of the modern language association mla style is used by: english classes humanities

Campaign Rhetoric - . rhetoric. rhetoric is the use of language to please or persuade (wordnetweb.princeton.edu) the main

The Literary Canon - . mike fleming. outline. arguments for arguments against underlying issues and values. what do we

Gabriele D’Annunzio and the World War I Rhetoric of Heroism in Asterope - . visualising war: the iconography of