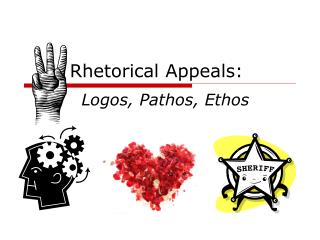 Rhetorical Appeals:. Logos, Pathos, Ethos. Rhetoric: A brief history. Rhetoric is the study of writing or speaking as a means of communication or persuasion. The history of rhetoric reaches back to the beginnings of human culture. What are Rhetorical Strategies? - Big ol’ name, but everybody uses them… what is “rhetoric”? rhetoric is the

The Rhetorical Situation: Five Components of Persuasion - . preparation for rhetorical analysis. rhetoric . the study of

The Art of Appeals - . presented by lori dafoe, cpc. agenda. review what to look for in an appeal, while reviewing an

Dumpster Diving and the Rhetorical Framework - . questions. questions about purpose 1. why does eighner prefer the term

Generic Criticism - Brief background. generic refers to ?genre"roots of generic criticism can be traced to aristotle

Aristotle’s Rhetorical Appeals and fallacies of logic in Thomas Paine’s The Crisis, NO. 1 - . remember yesterday?.