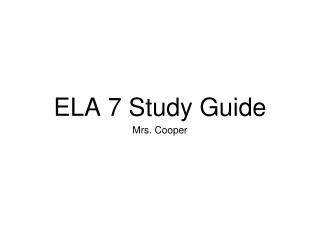 ELA 7 Study Guide. Mrs. Cooper. 1.) Oral tradition - traditions, stories, and history that are passed down by word of mouth Examples: fables, legends such as Pocahontas, myths. 2.) biography - a story about a person's life that is written by another person Chapter 7 Study Guide - . what ended the whiskey rebellion? and what was george washington’s role in the event? george

Chapter 7 Study Guide - . 6 th grade. 1. what was the hebrew religion called?. judaism. 2. what events happened before

CHAPTER 7 STUDY GUIDE ANSWERS - . get out your study guides please. test on chapter 7 is tomorrow!. 1. why did abraham

Chemistry Unit 7 Study Guide - You may use this study guide to review for your test; practice your new skills or review

Film Study ELA 8 - . storyboarding. directors want their audiences to respond to their movies in a particular way. they

ELA 7 CRCT Practice - . sentence types. identification identify the sentence type. label it as one of the following: s,

The Outsiders ELA 7 - . author: s.e. hinton. the outsiders is a book that shows that “beneath the trappings of madras