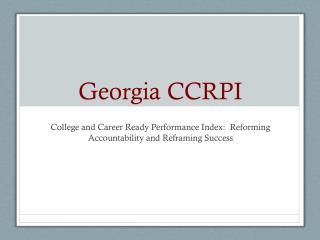 The Art and Science of CCRPI - . maggie glennon middle georgia resa. are you an artist. are you a scientist?. the best

Introduction to the Georgia Student Growth Model - . understanding and using sgps to improve student performance. why

Georgia Ethics for Educators - . rhonda powers, professional learning coordinator. what are the ga code of ethics for

Science is… - . a method that humans use to organize and explain the natural world. “kinds” of science. pure

Georgia Habitats - . the georgia piedmont is between the mountains and the plains. known for weathered and nutrient poor