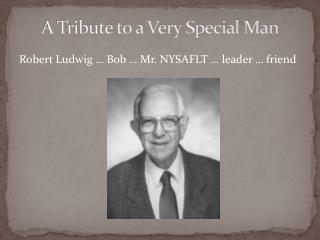 A Tribute to a Very Special Man

A Tribute to a Very Special Man - PowerPoint PPT Presentation A Tribute to a Very Special Man. Robert Ludwig … Bob … Mr. NYSAFLT … leader … friend. “Bob was an extraordinary human being in every regard.” - Janine Manley. A good life: an honored French teacher,

A Tribute to a Very Special Man Women Leather Jackets @ XTIROYAL Design - Women leather jackets have been on the market for several decades. they are

Unit Four - . the design plan for freedom tower. i. about the text. suggested

Old Testament Study of Judges - . compiled from preaching at dbc pastor kevin maki 2006. where does judges fit in

FM 6-22 Army Leadership “A Leader of Character, With Presence and Intellect” - . competent, confident, and agile. who

Greek Government - . end of the dark age. communities that survived the dark ages were very small and simple ruled by

Mesoamerica: The Colonial Period Compiled by Brad R Huber - Special thanks to carmack, gasco, and gossen’s the legacy

Walter Dean Myers - . a man of many words. a brief biography. born in west virginia, but raised primarily in harlem,