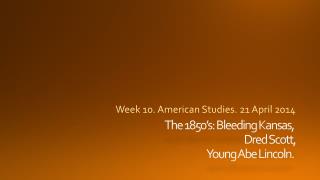 Week 10. American Studies. 21 April 2014. The 1850’ s: Bleeding Kansas, Dred Scott, Young Abe Lincoln. . 1854—The Kansas-Nebraska Act allowed these territories to vote on whether to have slavery or not . This policy was called “Popular Sovereignty.”. APUSH Review: Video #32: Attempts To Resolve Slavery In The Territories (Key Concept 5.2, II, B) - . everything you need

Who was Dred Scott? - . a slave born around the 1800’s married fellow slave: harriet robinson 2 children: eliza and

Section 3 - Slavery Dominates Politics Find Out: Why the Republican Party was formed The effects of the Dred Scott

What are the key issues and events that led to the Civil War? Day 2 - Slavery - . kansas-nebraska act dred scott case

Election of 1860 - . by: the dream team. the lead up. missouri compromise uncle tom’s cabin kansas-nebraska act

The Dred Scott Decision - . who was dred scott?. dred scott was a slave. he was taken by his master, an officer in the

Dred Scott - . anthony halloran. who is dred scott. dred scott is a boy who grow up as a slave and wanted to escape every

The Dred Scott Decision - . and its consequences. by the end of this lesson you will…. know and understand the impact

Dred Scott - Objective: to examine the importance of the lincoln – douglas debates and the dred scott decision. abraham