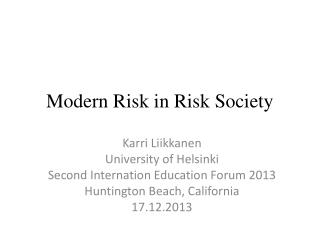 In this module you will learn what Risk Management is all about. - 3. understanding risk. 1. introduction. 2.

Country Risk Analysis - . a presentation by ecgc. what is risk?. uncertainty about the future outcome lack of knowledge

Risk Management Can We? - . presented by dan c. jones clinical assistant professor university of houston may 20, 2009

CAPM and the Characteristic Line - . the characteristic line. total risk of any asset can be assessed by measuring