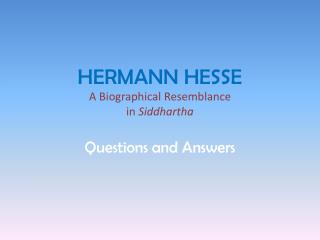 HERMANN HESSE A Biographical Resemblance in Siddhartha. Questions and Answers. Question #1. When and where was Hermann Hesse born?. Answer Q1. Born July 2, 1877, at Calw ( kalf ), Wurttemberg, Germany on the edge of the Black Forest. Question #2. Where is the town specifically located?. Hermann Hesse and Siddhartha - Hermann hesse (1877-1962). german painter, poet, and novelist, depicted in his works the

Family resemblance - . members of the same family often look similar. which parent do these children look more like?. if

Eva Hesse - . eva hesse - life. “i remember that i have always worked with contradictions and opposing forms, because