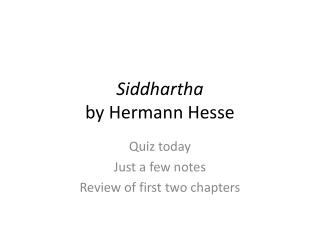 Siddhartha by Hermann Hesse. Quiz today Just a few notes Review of first two chapters . Review of Archetypes. Simply put, an archetype is a recurring pattern of character, symbol, or situation found in the mythology, religion, and stories of all cultures.

Hermann Hesse and Siddhartha - Hermann hesse (1877-1962). german painter, poet, and novelist, depicted in his works the

HERMANN HESSE A Biographical Resemblance in Siddhartha - . questions and answers. question #1. when and where was hermann

Safekeeping by Karen Hesse - . safekeeping , a modern novel by karen hesse , falls into the genre of fiction and is a

Witness by Karen Hesse - . summary of