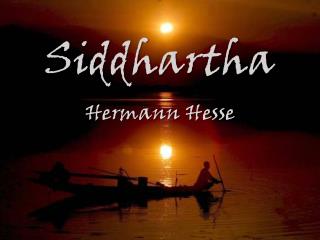 Siddhartha. Hermann Hesse. Siddhartha by Hermann Hesse (1877-1962) is loosely based on the spiritual journey taken by Siddhartha Gotoma and deals with the complications, anxieties, and ultimate rewards of shaping one’s beliefs. . Siddhartha - . janet nape mrs. goss world lit-1 5 november 2010. siddhartha . he is a hindu in the beginning of the story

Siddhartha - . hermann hesse. do now. with what religions are you familiar? what is universally important in religion?.

Siddhartha - . by: loretta pellegrinelli. facts about the book. author: hermann hesse original language that the book

Siddhartha - . describe a situation in which you have questioned your beliefs or the beliefs of your culture. what did

SIDDHARTHA - . reminders . do not cheat yourself or me! using book notes in place of reading the novels is

Siddhartha Review! - . alyson laing. siddhartha is a son of a brahmin who isn’t happy with his life. he decides he is

Siddhartha Gautama - . aims to chart the story of a buddhist leader. to explore the implications of this story.

Siddhartha: The Son - . feraco search for human potential 9 october 2012. “the son” poses siddhartha with his