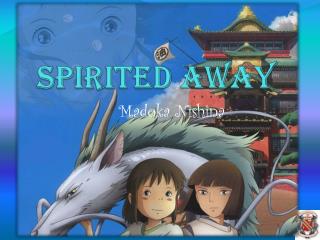 Hayao Miyazaki - . by: paul griffin period 4 intro to animation. introduction. animation has emerged as a form of

Notes on Greek Mythology - . the beginnings (much thanks to ingi and edgar parin d’aularie). night sky: uranus mother

Stereotypes in Japanese Anime and Disney Movies - . ryan p.3. tangled. rapunzel is a teenager who goes against her

Hero - . swain middle school chorus . there’s a hero if you look inside your heart you don’t have to be afraid of

Spirited Away - . by hayao miyazaki japanese, 2001 125 min. . spirited away. many, many awards winner academy award best

Absent - . if you are absent during any day of a roots week it is your responsibility to go online and get the 3 words