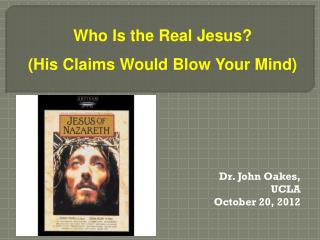 Who Is the Real Jesus? (His Claims Would Blow Your Mind). Dr. John Oakes, UCLA October 20, 2012. Who Does This Man Think He Is? The Claims of Jesus. Sage Prophet Liar Crazy person Messiah Son of Man God in the flesh Legend/Myth Man (ie. mere man) John Caron Unidata October 2012 - . and what are its plans for world domination?. netcdf is a…. file format. store data

Opportunity to Teach and Learn (OTL) a “foundational” perspective Jeannie Oakes UCLA - . what is otl in the

The Alter Ego and Nominee Lien 2012 UCLA Tax Controversy Institute October 17, 2012 - Is it still safe to tell your